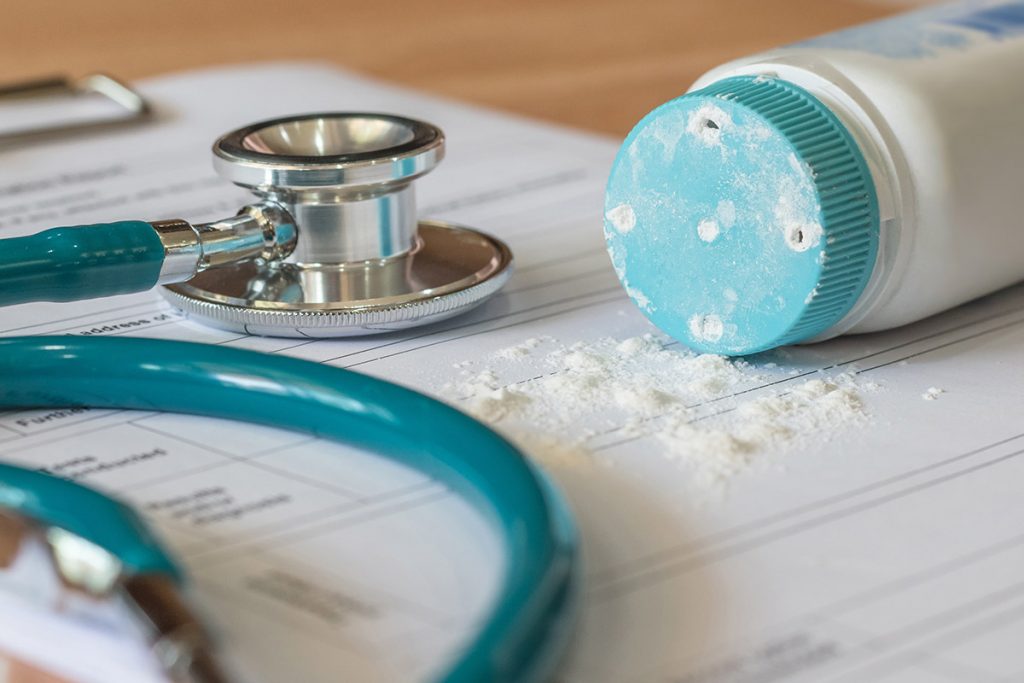 In 1970, scientists discovered talcum particles in ovarian tumors, leading some to believe that there was a link between talc-usage and ovarian cancer. The first study was conducted in 1982 by a Harvard scientist named Daniel Cramer, who concluded that there was likely a link between the two. Since then, there has been an ongoing debate as to whether talcum powder is an influential factor in the development of ovarian cancer. Today, that question remains unsettled, as various studies have used varying techniques, all of which are fallible and inconclusive. However, the growing number of “adverse event” reports submitted to the FDA has led many to support the ongoing effort to deduce once and for all whether the linkage is real or merely accidental.

To begin with, it is important to understand precisely what talcum powder is, what it’s used for and why it has emerged as such a potential problem. As described on the American Cancer Society website, talcum powder is commonly an ingredient in various cosmetic products such as baby powder and powders used mainly by women – these include body and face powders. At the chemical level, talc is composed of the following elements: oxygen, silicon and magnesium. Prior to 1970, talc contained Asbestos – a chemical known to cause cancer – but that is no longer the case today. Talcum powder effectively keeps bodily regions free of moisture in addition to reducing friction.

Recent lawsuits filed against Johnson & Johnson have brought various questions to the surface. One of the more pressing questions is the following: Has J&J knowingly sold a potentially cancer-causing product to women? And more to the point, have they targeted Black and Latina women? According to an internal memo obtained by Bloomberg, this might be the case.

The memo, circulated in 1992, suggested that the company “investigate ethnic (African-American, Hispanic) opportunities to grow the franchise,” after acknowledging that the “negative publicity from the health community on talc […] continues.” Because of evidence like this, the family of Jacqueline Fox were the first, out of nearly a thousand other plaintiffs, to successfully win this type of lawsuit against J&J. The Fox family was awarded $72 million for damages. More recently, a jury in California awarded $412 million to Eva Echeverria, marking the largest win yet. J&J has indicated that it will appeal the verdict.

Thus far, the cosmetic company has been forced to pay nearly $1 billion in just five major cases. As the wins rack up, the question becomes more pressing: is there truly a link between ovarian cancer and talc?

Dr. Cramer –  a professor at Brigham and Women’s Hospital who is often called to the stand as an expert witness – maintains to this day that the link is real: “Overall, women may increase their risk in general by about 33 percent by using talc in their hygiene,” he told NPR news. In 1985, Cramer requested that J&J put a warning on their products. The company failed to comply with the informal request.

Joellen Schildkraut, a professor at the University of Virginia who argues that talcum is specifically linked to ovarian cancer in African American Women, says there’s nothing conclusive, but the evidence is certainly there: “I would not call this conclusive. It’s consistent with other reports in the past. It’s suggestive of a stronger association, but it is not conclusive.”

In contradistinction to Schildkraut, the National Cancer Institute (NCI) is a bit more pessimistic. In a report, published in July of this year, the NIC editorial board had this to say: “The weight of evidence does not support an association between perineal talc exposure and an increased risk of ovarian cancer.” That’s a slight but significant change relative to their 2014 position, according to which there is a “modest increased risk” of ovarian cancer in talc-users.

To complicate matters, there are methodological questions that need to be resolved. Moving forward, most experts agree that more work needs to be done before anyone can say for certain that there is or isn’t a substantial link between ovarian cancer and talcum-powder usage.

If you believe you have a claim that talcum powder caused your ovarian cancer, please contact an experienced defective product attorney today.

When the U.S. Food and Drug Administration (FDA) issued its January 2020 safety communication warning of a possible … END_OF_DOCUMENT_TOKEN_TO_BE_REPLACED

We live in an era in which popping a pill to feel better has become the norm. There are pills to control our blood … END_OF_DOCUMENT_TOKEN_TO_BE_REPLACED